Al-Qaeda has taken  a series of hammer blows since 9/11. Terror plots unravelled, millions of dollars in illegal funds confiscated and many high-ranking commanders arrested or killed  by the West’s security forces.

Hidden high in the mountainous badlands of northern Pakistan, Zahira Khan, Pakistan’s newly appointed Al-Qaeda leader, is secretly plotting a new and terrible ‘spectacular’ to avenge the martyrdom of their spiritual leader, Osama bin-Laden. His diabolical attack will rival the merciless assaults on New York, Washington D.C., and the devastating  7/7 bombings of the London Underground.

Zahira Khan’s sinister plan will unite rival terror organisations and send shock waves of horror and revulsion around the world; its message simple: Al-Qaeda can still strike anywhere, and the West , despite it’s awesome firepower and past success, can do nothing to stop them.

In the shadowy intelligence world, there have been growing rumours of something new. With the assistance of  British GCHQ, the CIA notice something strange, and then they get  lucky…

SAS Sgt Pat Farrell and the men of Shadow Squadron will be tested far beyond the limits of their usual courage and determination, in the latest terrifying battle against the forces of evil, when they meet the deadliest of foes… 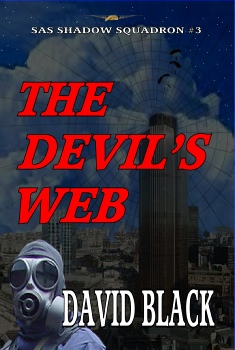