'It all reads as authentic, page-turning stuff. Let's hope no one mistakes it for an instruction manual.' Jeremy Clarke - 'Low Life Columnist, The Spectator

Introducing Sgt Pat Farrell MC, and the men of the ultra-secret reserve SAS - the Shadow Squadron. By day they walk among us, but when the Security Services detect a credible and highly dangerous threat to London, the men in black swing into action, guns blazing…

In the first of his compelling new Shadow Squadron series, best selling author David Black has produced his own fictional nightmare scenario: What if the Iraqi weapons that were said to be dismantled in the late 1990's included the ultimate WMD? And what if the deposing of Saddam Hussein left one of his most ruthless military leaders still at large, actively seeking a customer for Iraq's only nuclear bomb?

In The Great Satan, the current world situation meets the page-turning action prose of pulp fiction. The central antagonist is Colonel Jamal Al-Mahdi, veteran of Saddam’s murderous campaign against the Kurds, who transports the ultimate hidden WMD to the UK. The nuclear bomb that is the greatest Satan of all, awaiting deployment by a group of young British jihadi at a point where we can only hope fiction diverges entirely from fact . . . Can Sgt Pat Farrell and the men of the SAS Shadow Squadron stop them in time, or will London be turned into a smoking, radio-active pyre? 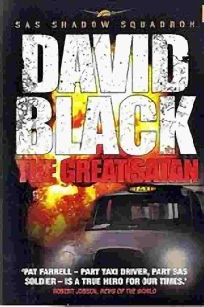