The long summer campaigning season was over. Centurion Rufus and his battle-hardened century - part of three mighty Legions, were returning to the safety of their winter quarters beside the River Rhine. Like their commanding General, the veteran Centurion and his men suspected nothing.

The entire Germania province was about to explode into a bloodbath of rebellion.

The Roman General had been played for a superstitious fool. For months, he had nurtured a deadly viper in the Legions' midst. The turncoat had spent his childhood learning Roman ways. Little did they know, but his ultimate goal was one day to destroy the superbly trained and equipped Imperial army of the north.

Caught in a cunning web of the traitor's lies, marching in column in atrocious weather, the exhausted Legions were repeatedly attacked by thousands of savage tribesmen in the Teutoburg Wald; a vast, sinister and forbidding tract of forest on the untamed rim of the Roman Empire. During seventy-two hours of unimaginable terror, the Legions were systematically and ruthlessly destroyed.

As their comrades were slaughtered, cut off and alone, Centurion Rufus and condemned Legionary Sextus fought a terrifying, desperate battle to survive the horrors which surrounded them... 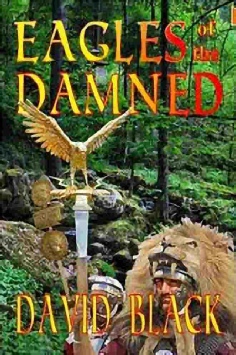 Eagles of the Damned